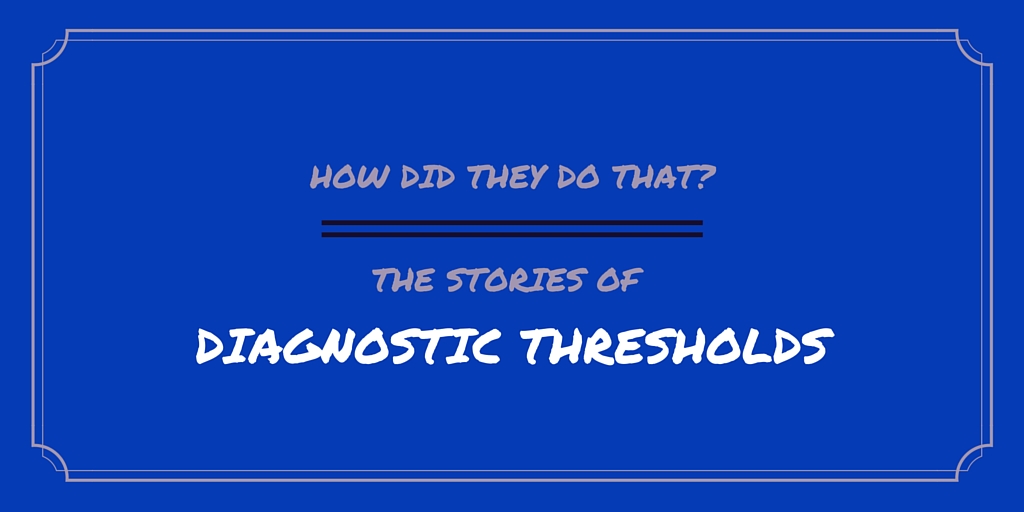 “There’s a story behind every person. There’s a reason why they’re the way they are.”
(Unknown)

Yes, and there’s a story behind every diagnostic threshold, too.

Thanks to these stories, we can become aware of the relevant evidence and, of course, the reasons why we should follow these thresholds.

Generally, there are 2 methods used to come up with diagnostic thresholds.

Method #1: We gather information from a large sample of healthy people, figure out what the “physiologic” values are. Then if an individual falls out of this reference range, he or she will be labeled “abnormal”. But how do we know whether “abnormal” is indeed “abnormal” or not? I mean, if an atypical result isn’t associated with a higher risk of disease (or mortality), it doesn’t make any sense to consider it “abnormal”. This issue creates the foundation of Method #2: we’ll identify test results associated with increased risk of an adverse outcome. However, because the relationship between test results and the adverse outcome is usually continuous, it may be difficult to choose a cut-off point, above or below which prognosis changes.

Let’s find out how epidemiologists use these 2 methods by studying the cases of hemoglobin concentration in anemia and HbA1c in diabetes.

The story of anemia

In 1968, the World Health Organization (WHO) proposed thresholds to diagnose anemia. (Anemia is a condition in which there is a deficiency of red cells or of hemoglobin in the blood, resulting in tiredness and a pale appearance). The diagnostic thresholds the WHO proposed were based on small reference samples of nonelderly subjects [3]:

(With g/dL being a measure of the concentration of hemoglobin in the blood).

Those diagnostic thresholds have received several criticisms. Although it’s been shown that the thresholds defined by the WHO correlate with higher risk of mortality in people ≥ 85 years old [1], some authors think that evidence is still not sufficient for those thresholds to be applied.

Two large databases (NHANES-III and SCRIPPS-Kaiser Data) were collected then, to help us verify the thresholds proposed by the WHO.

If 2.5th percentile is chosen to set diagnostic points, based on the SCRIPPS-Kaiser database, the thresholds should be:

Based on the NHANES-III database, the thresholds should be:

Not all relevant studies are cited here. But as we can see, different thresholds were proposed across the studies.

The thresholds have all been determined using science. They all are evidence-based. But they vary and they are numerous.

So, a good understanding of the stories behind the numbers is always necessary to choose a reasonable number, right?

Which threshold would you choose?

The story of HbA1c

In the landmark “Evaluation of Screening and Early Detection Strategies for Type 2 Diabetes and Impaired Glucose Tolerance” (DETECT-2) analysis, researchers pooled data from over 44,000 individuals across five countries. They then examined the relationship between retinopathy and three glycemic measures: fasting plasma glucose (i.e. blood sugar levels several hours after fasting), 2-hour post oral glucose load plasma glucose (i.e. blood sugar levels 2 hours after consuming glucose), and HbA1c [4]. HbA1c is a measure of an individual’s average blood glucose levels over a recent period of weeks/months and retinopathy is disease of the retina which can result in impairment or loss of vision. Retinopathy has advantages over the other diabetic complications. It’s relatively easy to identify, and it’s specific to diabetes, unlike nephropathy or neuropathy which, without sophisticated investigations, can be hard to attribute with confidence to diabetes.

The researchers found that the prevalence of retinopathy was low when HbA1c < 6.0% but it increased above this level, with an optimal threshold of 6.4%.

So, to predict microvascular complications (such as retinopathy), the diagnostic threshold of HbA1c ≥ 6.5% appears to be appropriate.

However, the threshold of 6.5% is not so good in predicting cardiovascular outcomes. The American Diabetes Association (ADA) states that individuals with a HbA1c from 5.7% to 6.4% are considered to be at “increased risk” for cardiovascular disease. Therefore, those people should be guided with effective strategies, such as weight loss and physical activity, to lower their risks. [7]

That’s maybe one reason why the WHO added this sentence in their report in 2011: “A value of less than 6.5% does not exclude diabetes diagnosed using glucose tests.” [6] (i.e. because individuals may still be at elevated risk for certain complications – like cardiovascular disease – even below the 6.5% diagnostic threshold).

To verify the use of HbA1c for diagnosing diabetes, in 2010 Zhonglu and colleagues conducted a study on 2 populations [5]. Let’s call them population A and B. All the participants in the two populations underwent an oral glucose tolerance test (which was considered the “gold standard” for diagnosing type II diabetes in this study) and a concomitant HbA1c measurement.

HbA1c ≤ 5.5% was chosen to rule out diabetes and ≥ 7.0% to rule in diabetes. Zhonglu applied those thresholds to population B.

By lowering the ruling-in point to 6.5%, the specificity remained 99%, while positive predictive value was still near 100%. Wow! So these thresholds can be used to very accurately rule diabetes in and to rule it out.

This time, the case is not so hard, right?

It’s the end of our journey through the stories of anemia and diabetes diagnostic thresholds. Hopefully those 2 stories can help you gain a deeper insight into the way the epidemiologists came up with those cut-off figures.

It’s your turn now. Do you have any story to share? Don’t hesitate. We’d love to hear.

3/ World Health Organization. Nutritional anaemias: report of the WHO scientific group. Geneva: WHO; 1968.

6/ World Health Organization. Use of Glycated Haemoglobin (HbA1c) in the Diagnosis of Diabetes Mellitus. Abbreviated Report of a WHO Consultation. Geneva: WHO; 2011.

No Comments on How did they determine diagnostic thresholds: the stories of anemia and diabetes