The standardised mortality ratio and how to calculate it

What is a standardised mortality ratio (SMR)?

Why do we use standardisation?

Comparing each individual age and sex category is possible but with additional categories e.g. diagnosis, the data becomes unmanageable. Instead, standardisation gives us a single figure to compare the death rates in two populations whilst accounting for different population distributions. This conveys the information more simply although the trade-off is a loss of some information (2).

When to use the SMR

Mortality data can be standardised using the direct or the indirect method (3). Use the direct method when you know the age-sex-specific rates for the study population and the age-sex-structure of the standard population. Further details on direct standardisation and how to calculate it can be found in references 2-4 but it will not be discussed further in this blog.

How is the SMR calculated?

The SMR is usually calculated using age- and sex-specific categories. A worked example is provided later.

To calculate the number of expected deaths:

B. Need estimate for the number of people in each category for each of the standard and the study populations.

D. Add all the age- and sex- specific expected deaths to get the expected number of deaths for the whole study population.

What does the SMR mean?

Sometimes the SMR is expressed after multiplying by 100. In this case:

However, to determine whether the SMR is significant we need to calculate the 95% confidence intervals (CI).

If the 95% confidence intervals do not cross 1.0 then the SMR is significant.

Is the SMR significant? 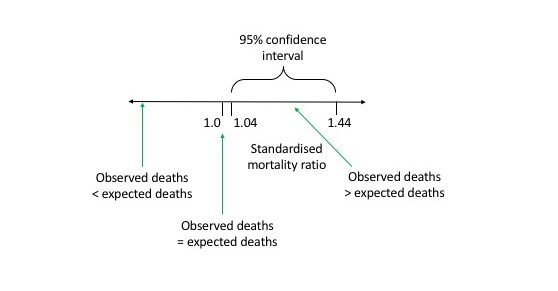 The 95% confidence interval does not cross 1.0 so the SMR is significant.

I have an SMR figure. What’s next?

The SMR has no intrinsic value, it is used for comparison purposes only (2). SMRs can be compared to an upper control limit and a lower control limit. Within these limits, data variation is consistent with random variation. Data points outside of these limits are unlikely to be due to change and warrant further investigation (either to investigate possible poor practice or to learn from high-performing areas) (6). A high SMR cannot tell us why there are excess deaths but it does suggest further investigation is required. Excess deaths may be:

The SMR in practice

Factors other than age and sex also influence mortality rates. Therefore, other factors are often included in standardised mortality ratios. These factors may include (8 and 9):

To help with national reviews of hospital mortality another ratio called the Summary Hospital Mortality Indicator (SHMI) is used. There are different variants but two common ones are:

I am a 4th year medical student studying at the University of Leeds and I have completed an MRes in Medicine at the same university. View more posts from Anna