What is data dredging? How does it affect the p-value? What is its impact on the world around us?

The following discussion will attempt to define data dredging and provide an answer to such questions.

Data dredging is defined as “cherry-picking of promising findings leading to a spurious excess of statistically significant results in published or unpublished literature”. This may lead to an exponential increase in the risk of inclusion of large quantities of false positive results, thereby corrupting the data that was meant to be originally reported. Data dredging is recognized by several names such as ‘fishing trip’, ‘data snooping’, ‘p-hacking’ and so on. We may use these term interchangeably in the discussion below.

Ioannidis (2005) explains that ‘negative’ research is useful and, in fact, it is a misnomer to classify it as negative. Another instance that is closely associated with this phenomenon is the recent trend of multicentre studies. Ioannidis further explains that “What is less well appreciated is that bias and the extent of repeated independent testing by different teams of investigators around the globe may further distort this picture and may lead to even smaller probabilities of the research findings being indeed true.” Therefore, it is prudent to understand that interpretation of research and the data obtained from it is as important as classifying it as ‘positive’ or ‘negative’. 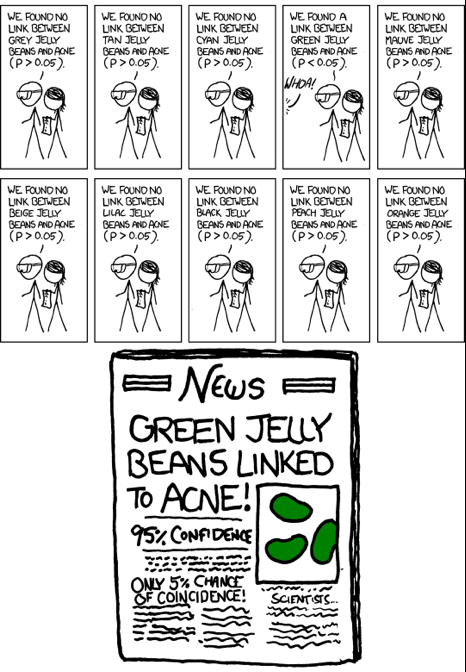 Image has been adapted from: https://imgs.xkcd.com/comics/significant.png under Creative Commons License 2.5 Randall Munroe. xkcd.com.

According to the American Statistical Association (ASA), a p-value is defined as:

the probability under a specified statistical model that a statistical summary of the data (e.g., the sample mean difference between two compared groups) would be equal to or more extreme than its observed value.

So, in order to put things into perspective, the ASA proposed certain principles regarding p-values to improve their conduct. They are as follows:

Now that we have established that p-values are not the one-stop solution for epidemiological studies, let’s take a look at other methods which are used for the same purpose:

These measures rely on addressing the size of an effect and the validity of a hypothesis directly. However, since they rely on an assumption, they are to be considered as a complement to p-values instead of its substitute.

Impact of data dredging on epidemiology

Data dredging affects a study in several ways (almost always in a negative manner), which ultimately hampers the study, often without the knowledge of the investigator. A small amount of confounding is probably inevitable. However, voluntary application of such a practice is not only unethical but also leads to misleading the general public. Some of the common effects of data dredging are as follows:

P-hacking is a widespread practice amongst the scientific community. Such a practice is unethical and a gross waste of resources. However, it can be restricted if one follows proper guidelines for conducting a study. More importantly, such a phenomenon is a reminder to all the investigators that it is more important to study the pitfalls of research before venturing into conducting one. That is not to say that one should spend a significant time of research in avoiding voluntary errors, but to say that one must be conscious regarding it.

You may also be interested in the following blogs for further reading:

Vighnesh is a Final-Year medical student pursuing MBBS from Dr.NTR University of Health Sciences, India. His areas of interest include Evidence-based medicine, Biostatistics, Translational research, Surgery, and Robotics among others. He has 10 abstract publications to his account until now and is always open to collaboration for conducting studies. He actively contributes to Cochrane Crowd in his spare time and has classified more than 100,000 studies across all the categories. View more posts from Vighnesh