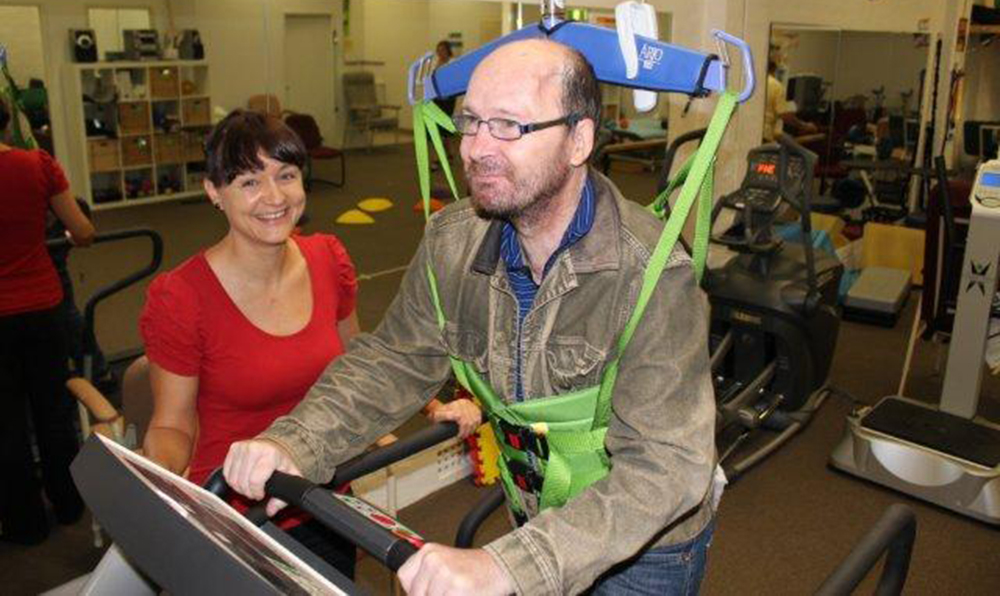 I am interested in focusing my studies on neurological physical therapy.  Neurological physical therapy helps to rehabilitate patients with conditions such as stroke, traumatic brain injury, spinal cord injury and so on.  One particular interest of mine is Amyotrophic Lateral Sclerosis (ALS).  ALS is a progressive neurodegenerative disorder that leads to muscular weakness due to a loss of neurons (nerve cells), which eventually causes death.  ALS is a particularly difficult diagnosis as there is not yet a cure and there is little research to guide rehabilitation for patients with ALS.  However, I recently found an article that looked at the effects of supported treadmill ambulation for patients with ALS.  Supported treadmill ambulation training is a system that utilizes a harness to unweight a person while they walk on a treadmill.  The supervising clinician can adjust the percentage of body weight that is unweighted, based on the person’s ability to walk effectively and safely.  I will provide an overview on the article and share some of my thoughts.

Why is this article important?

It is generally understood that regular exercise provides many benefits in a healthy population as well as for people with neurological conditions such as Parkinson’s Disease and Multiple Sclerosis. However, there is a lack of strong evidence to support regular exercise for patients with ALS.  The lack of evidence has led many clinicians to discourage patients with ALS from engaging in regular physical exercise because of the general belief that physical strain might be harmful and aggravate motor neuron (nerves supplying muscles) demise, leading to the risk for overwork weakness (1). This is unfortunate because patients with ALS are still like everyone else in the fact that decreased physical activity leads to physical deconditioning, along with potential psychological issues.  The goal of this article is to provide exercise guidelines that are safe, feasible, tolerable and effective for patients with ALS.

How was the study conducted? The researchers chose participants based on a diagnosis of ALS (in stages II or III), the participants had to be able to walk 25 feet in one minute or less with an assistive device (cane, walker, etc.) and they had to be between 25-80 years of age.  The study originally had 9 volunteers but ended with a total of 6 volunteers, due to 3 people dropping out because of non-ALS medical issues. The participants performed repetitive rhythmic exercise-supported treadmill ambulation, three times a week for 8 weeks, under the supervision of a physical therapist.  Each training session was 60 minutes long, with 6 intervals of 5 minutes of rest to avoid fatigue and overwork weakness.  To measure feasibility the study looked at the number of volunteers screened compared to the number of volunteers enrolled in the study, compared to the number of volunteers that finished the study.  Tolerability was measured by the rate of perceived exertion during the 6-minute walk test, Fatigue Severity Scale and progression of distance and speed. Safety was assessed by using the ALS Functional Rating Scale-Revised, vital capacity and manual muscle testing of both legs. To determine if the exercise was effective the study looked at gait performance during the 6-minute walk test on the treadmill and overground, the 25-foot walk test, as well as strength of muscle contraction. Each measurement was assessed before treadmill training, at 4 weeks and at 8 weeks.

What did the study find?

Although all outcome measurements improved after 8 weeks of training, not all improvements were significant.  The outcome measures that showed significant improvement were the ALSFRS-R score, RPE, 6MWT on treadmill (distance, average speed and stride length), and distance during overground 6MWT.

Putting it all together

The results show that repetitive rhythmic exercise-supported treadmill ambulation over 8 weeks was feasible, tolerable, safe and effectively improved gait function in patients with ALS.  Most importantly, the study did not provoke an increased rate of disease progression.

I believe that the authors did a good job looking at the many aspects of exercise training in patients with ALS.  I liked that the study included not only objective data but subjective as well.  I feel that subjective data is important because it provides insight on the participant’s perspective.  The study  reported that the participants stated that they felt great after the study and wanted to continue exercising on the treadmill after the study concluded.  It would have been helpful to include a quality of life outcome measure, to quantify that data.  The study did have a few drawbacks such as a small number of participants and there was not a control group.  It will be helpful in the future to conduct larger studies with a control group in order to solidify the findings of this study.  I would also like to see future studies include participants who are classified in each of the different stages of ALS.

Would I use supported treadmill ambulation?

Yes, I would definitely use supported treadmill training for patients with ALS.  I would make sure to allow for rest breaks to decrease the risk of fatigue and overwork weakness.

I am a third year physical therapy student at Elon University. I live in North Carolina with my husband and dog. I am especially interested in neuro PT. Several of my classmates and I have established a PT student run, pro-bono clinic at Elon, called Health Outreach Program of Elon (HOPE). The clinic provides physical therapy services to underinsured and uninsured patients in our area. View more posts from Jennifer

No Comments on Does supported treadmill ambulation help patients with ALS? Article review