“Name a ‘large’ RCT without a composite primary outcome?”

While you are looking for this ‘large’ trial, let’s set the objectives for this short blog:

The HIP ATTACK investigators assessed whether accelerated surgery (defined as speedy surgery in less than 6 hours of diagnosis) compared to standard care in adult patients (45 years or older) with a hip fracture that required surgery, improved outcomes (1). A total of 2,970 patients were enrolled and the co-primary outcomes were death and a composite endpoint (CEP) of major complications (defined as mortality and non-fatal myocardial infarction (MI), stroke, venous thromboembolism (VTE), sepsis (defined with infection), pneumonia, life-threatening bleeding, and major bleeding) at 90 days.

The rationale behind the composite seems to be aligned with competing risk definition (i.e. there is a competing risk if the surgery results in the death of the individual, some of whom, if lived would experience an MI) (2).

Is the underlying biology of the component similar that it leads to a similar relative risk reduction (RRR)? Despite lacking clinical expertise, I think the biological rationale to have components such as non-fatal MI, pneumonia, and VTE to have a similar treatment effect is weak despite the intervention for this population (Figure 1). 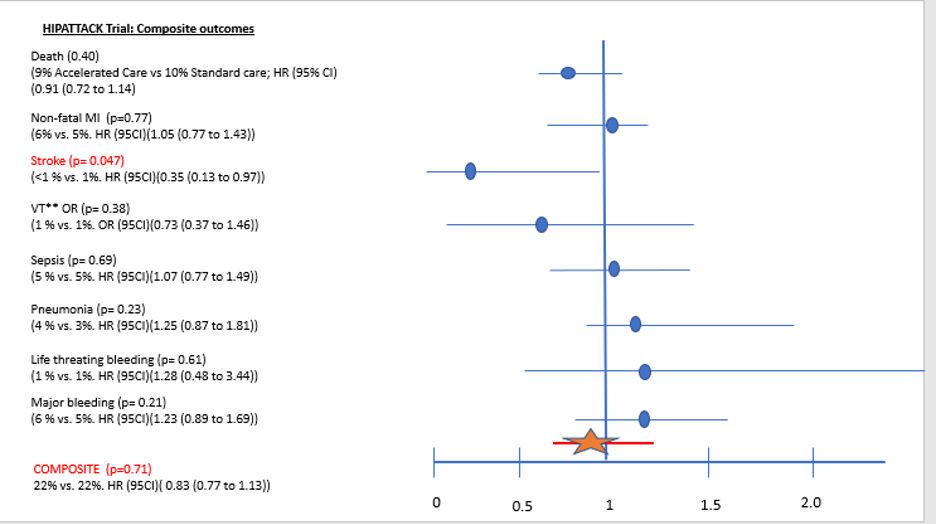 The systematic assessment of the composite shows:

1) a moderate gradient of outcomes selected in the composite based on authors definitions;

Therefore, point estimates and CIs for individual component endpoints should be reported to allow clinicians to make final decisions for their patients.

The authors of the HIP ATTACK trial reported the overall composite estimate in the abstract. Individual reporting of composite endpoints is also recommended based on our appraisal above. The authors could have reported their primary outcome as follows: the results of composite end-point (CEP) of major complications suggests that accelerated hip surgery, compared to standard care surgery, may reduce the risk for strokes but has uncertain effects on vascular death, non-fatal MI, VTE, sepsis, pneumonia, life-threatening bleeding, and major bleeding at 90 days follow-up. 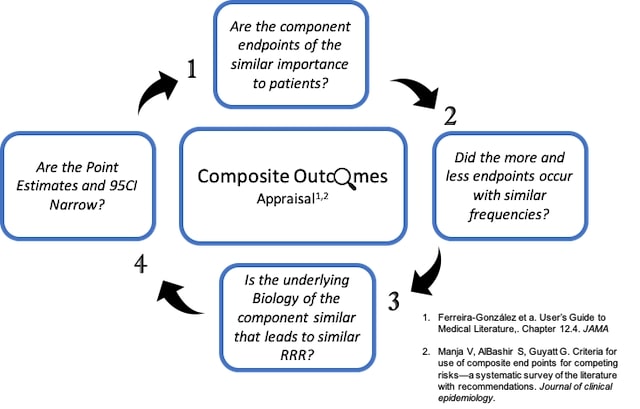 Original cover photo by by Lea Böhm on Unsplash

You can read more about composite outcomes in this article on the Testing Treatments website.

Hello, my name is Yousif, I graduated with a Master degree in Health Research Methodology from McMaster University, Ontario, Canada. For questions please follow me on Twitter @EliyaYousif. View more posts from Yousif