There is large debate surrounding the misrepresentation and incorrect judgement of published research results that originates from the misuse of definitive claims such as ‘no evidence of effect’ and ‘evidence of no effect’.

Claims like these are quite nuanced and often used without being completely understood.

So how does ‘no evidence of effect’ differ from ‘evidence of no effect’?

Claiming ‘no evidence of effect’ translates to suggesting that overall, the study did not manage to prove that the treatment or intervention leads to an expected outcome (e.g. no evidence that drug X can prevent heart disease).

No evidence of effect does not always mean that there is no effect in real life. This assumption is often the result of insufficient data. For example, a small study sample can lead to a lack of power to detect a real difference. (1) However, sometimes, even if a study has an adequate sample size, there are other factors influencing the results, such as study quality. (1) This should not by any means be confused with ‘evidence of no effect’.

Claiming that there is ‘evidence of no effect’ translates to suggesting that the treatment or intervention is definitely not effective. Such claims can often be dangerous or misleading when used in routine clinical practice and policy decision making.

A study by Smith et al. aiming to investigate how often authors of Cochrane reviews made incorrect claims of ‘no difference/no effect’ found that they were much less common in reviews published in 2017 than in those published in early 2000s. (2) These findings reflect on a global effort made to minimise bias in results interpretation, however, there is still room for improvement.

Cochrane recommends avoiding strong statements such as ‘evidence of no effect’ when interpreting research results and instead relying on more general statements such as “There is insufficient data/evidence to indicate an effect of the intervention, compared with control, in terms of effects on [outcome]…” (3)

However, it must be noted that the responsibility of misinterpreting research results does not always lie with the researchers conducting the study. For example, randomised controlled clinical trials often do not show a significant difference between e.g. treatment X and treatment Y and are therefore called ‘negative.’ (1)(4) By calling these trials ‘negative’, it is implied that they have shown that there is no difference/no effect, although usually what these studies actually show is that there is insufficient evidence or an absence of evidence of a difference. (1)

However, the problem of misinterpretation in medical research lies deeper. In research studies, authors often use statistical significance testing to reach conclusions and suggest that there is ‘no difference’ e.g. between two treatments or ‘no effect’ of e.g. using a strategy for the prevention of a certain disease. (2) These strong statements are often included in the abstracts, which are the part of a paper that is mostly read by researchers and captured by the media.

Let us look at a simple example

A published randomised controlled trial did not show a significant difference between treatment X and placebo.

Confidence intervals are particularly useful when reporting non-significant results. In the example below, which shows two ‘non-significant’ results (5) , the estimate that is accompanied by a wide confidence interval is potentially explained by a small study sample size and the possibility of random error. While it is not significant, the estimated effect seems to be around four, suggesting that it is possibly important, and re-conducting the study with a larger sample size might actually prove that. (5) 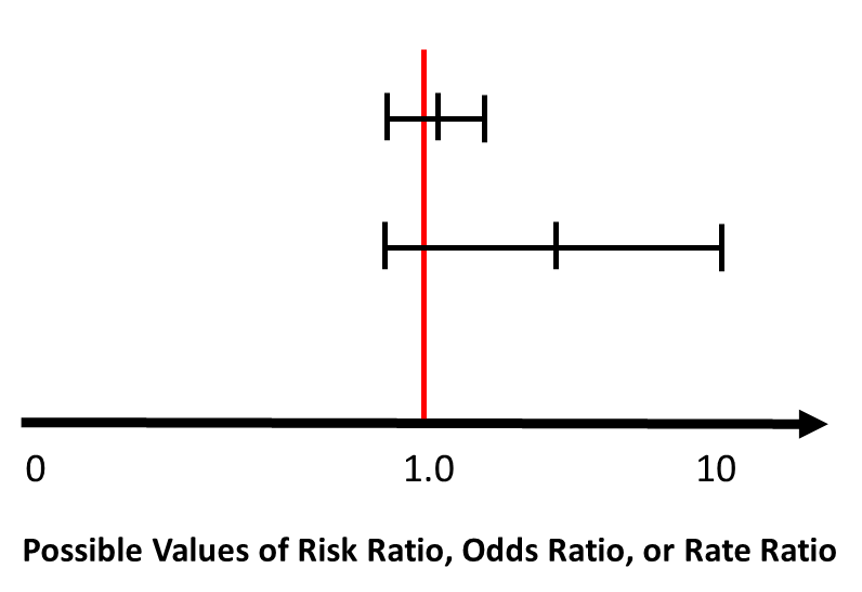 Misinterpreting ‘no evidence of effect’ and ‘evidence of no effect’ or relying on absolute research claims solely based on a p-value can be dangerous, especially when making decisions about patients’ lives. This phenomenon has been largely observed in recommendations made by public health agencies, where decisions need to be carefully made.

Public health policy language is commonly dichotomous – which means it relies on a Yes or No, Right or Wrong answer. This often leads to research results being over-simplified or wrongly interpreted in an effort to provide public guidance that is simple and straightforward. To avoid these problems, policy makers should work closely with researchers, seek their advice, while researchers on the other hand should make clear what their research is about, avoid overstatements and acknowledge limitations.

It is extremely important to distinguish between insufficient evidence to make a policy recommendation from no evidence for it. It is also critical to question whether the absence of evidence can justify not taking action when it comes to public health matters.

Therefore, they should invest some of their time to understand the difference between those terms in order to avoid misinterpreting their own research findings and to question these claims when they are made in published research.

You may also be interested in reading the following blogs:

Teapots and unicorns: absence of evidence is not evidence of absence

Confidence intervals should be reported

I am a 3rd year PhD Student in Diabetes Epidemiology at the University of Leicester, UK. My research focuses on preventing type 2 diabetes in women who had gestational diabetes. I'm passionately curious about research, with a particular interest in prevention of diabetes and other non-communicable diseases, real world evidence, and causal inference in epidemiology. I also have a strong interest in communicating science to the public and making it accessible. Find me over on Twitter: @Elpida_Vnz View more posts from Elpida